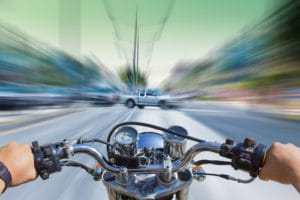 A two motorcycle crash killed one man and injured a woman. Two Harley motorcycles were cruising north on Route 9 when the trailing motorbike crashed into the one it was following. The rear-facing motorbike veered off the road near mile-marker 58 and struck a guardrail.

The man, age 26, was pronounced dead at the accident scene. A 27-year-old female passenger on his bike was injured. The rider of the following Harley said he wasn’t injured in the collision. It’s unclear if the motorcyclists knew each other.

What a tragic accident. Our sympathies go out to the family of the rider who lost his life.

According to the New Jersey Department of Transportation Crash Facts, less than 100 people die in motorcycle accidents each year. However, thousands of riders suffer injuries. Motorcycle accidents are frequently caused by drivers operating a motorcycle at an unsafe speed, following too closely, and failure to yield the right-of-way.

As in this example, a rear-end collision accident is usually an avoidable one. All New Jersey drivers must keep a safe distance when following another vehicle. Motorcyclists and other drivers shouldn’t tailgate. It’s important to know if the vehicle ahead slows down or stops so that the following driver has the chance to slow down or stop their vehicle to avoid a collision.

When a driver suffers serious injuries or death in a rear-end fatality, the driver who hits from behind is typically at fault. In this example, one person died and another was injured on the first Harley. Survivors or family members may be able to file a wrongful death lawsuit. The injured rider may be able to claim compensation for medical bills, lost income and wages, and pain and suffering.

Though it’s clear that a driver who rear-ended the mortally wounded rider of the other Harley is probably at fault, New Jersey law doesn’t presume fault. The following items must be considered in a legal claim against the rear-end rider:

– The at-fault rider was negligent

Plaintiffs in a motorcycle accident-wrongful death claim may obtain financial compensation for 1) medical expenses, if any, that were accumulated before death, 2) funeral/burial expenses, 3) loss of future earnings the deceased individual could have earned, 4) loss of support, 5) loss of medical, retirement and other benefits, 6) other financial losses as a result of the loved one’s wrongful death, and 7) non-monetary damages, such as loss of affection and companionship.

A wrongful death claim is subject to the New Jersey statutes of limitations. These time limits must be met to file the claim. If you believe that a loved one died because of someone else’s negligence, contact Andrew S. Prince to schedule an initial case review at phone number 732-388-5454 or toll-free at 800-832-6529.